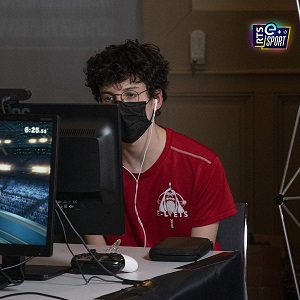 Neo (@NeoSSB_) is a Palutena player from Geneva, playing for E-LVETS. While he didn't make it on the 2019 Swiss Smash PR, he had multiple wins against PR'ed players in 2020, placing regularly in the top 8. He hasn't won a big tournament yet but placed 2nd in both Frismash Cup #1 and Röstinament #2, so don't be surprised to see him make an appearance on the next PR.

Let’s start off with something a bit more personal. How has COVID affected your private life?
COVID didn’t affect me that much personally. Like before, I’m going to school, get back home, do my homework and then play Smash for the rest of the evening. During the first quarantine we didn’t have class so that felt like vacation to me, which meant more time to play Smash and meet friends.

There are no offline events anymore, so how are you playing Smash these days?
At first it was hard mentally, because I love traveling to events and meeting new people. But it didn’t affect my motivation for Smash. During the first quarantine I was training more than ever, because that is how I spend my free time and I also entered a lot of online events. But during the second half of 2020 I felt a bit burned out from the game, especially from September to December. I was practicing a lot, but it was hard for me to judge my improvement without tournaments. I felt as if I was playing in a void, without being able to reflect on what I have to improve on. I realised that I don’t really gain much from playing Smash all day, but should instead focus on shorter sessions, which allow me to fully concentrate and whenever I notice that I’m losing my focus, I’m stopping. This is way more productive, compared to earlier when I would sometimes play 8 hours a day. Nowadays I feel like I wasn’t really training back then, just playing the game. It feels good to approach the game in a more disciplined fashion and I think I’m getting better than ever before, which makes me happy.

And how often are you playing online?
Almost every day. I guess I’m kind of addicted to Smash (laughs). I wouldn’t want to miss a day without playing Smash. So if there is a day where I didn’t get to play Smash, on the next day I would wake up at around 5am just to get some practice in training mode before I go to school. With that being said, I realised that I don’t really like online tournaments. I can’t really explain why, but for some reason I feel a lot more pressure playing in an online event compared to offline. I’m getting more nervous and just generally play worse. In the beginning I thought it was simply because I just started entering them and I assumed I would get more comfortable over time, but that change never came, so I felt that it’s not really worth it and stopped entering them. online being worse is obviously part of the reason, but the main reason is definitely that I’m not in the right mindset for online events.

If I remember correctly, you’ve entered one of Flow’s Fight Nights (Scheduled First-to-5 or First-to-7 Sets between 2 players that are streamed with commentary on his stream). Was that a different experience?
Yeah, that had a different feeling to it. I’ve been talking to Flow a lot during the last few months and so when he approached me, I felt like I couldn’t really refuse his offer. I also really like the concept in general. It creates visibility for the Smash scene in Switzerland. When I was talking to some people in the French community, I noticed that they don’t really know any Swiss players and some of them seem to think that rohan_doge and I are the best. When I asked them if they knew Destany they answered: “Ah, yeah… the Terry player, right?” And I’m sitting here, thinking: “Bro, he’s only the best player in Switzerland…”. So, I like entering these kinds of events for the visibility it gives to the Swiss Smash scene. During them I also don’t feel nervous. There’s no pressure on me, I just play the best I can and if I lose, I lose, and if I win, I win.

Did you try Yuzu*?
*Yuzu is a PC-emulated version of the game that, together with Parsec allows you to play online with less of the known issues, like lag. You can learn more here.
Yeah, I did! I love Yuzu. I recommend everybody with a good PC to try Yuzu (because if you want to host a session you need a PC with decent specs. As the person joining, you only need a decent internet connection). Rohan_doge, for example, is almost exclusively playing Yuzu these days, because Metaknight is bad online, and Yuzu allows him to actually get some practice. I mostly play Yuzu with people from the Geneva Smash Community and once I was even able to play with Glutonny, which was pretty cool.

And how often are you able to play offline?
2 or 3 times a week on average. Usually, people come over to my place. I mostly play with the young community of Geneva, because they have a lot of free time and I really want them to get better at the game.

Ah, that’s interesting, because just last weekend I saw the Geneva Generations Crew Battle (Zoomers vs Boomers).
Ah, we (Zoomers) lost, that was so sad! But I was happy with our performance, we played well and worked together as a team. I think it mostly came down to our mental game, as players I feel like we were the stronger team.

And this wasn’t even the first offline event you had in the Romandie, right?
Yeah, we had the Numerik Games tournament on April 24 with top players from France like Glutonny, Leon and more. (you can check the bracket here and watch the VoD here). I think that was one of the best events of my life. I got 5th place losing to Glutonny and Nitox.

You’re playing both online and offline, and while some of the online is Yuzu, you still play some wifi grinding sessions. With all the disadvantages to online play (input lag etc.), what do you hope to gain from these purely online sessions?
I mostly play them for matchup experience. Even with all the disadvantages to online you can still learn matchups and even get some actual training in if you play with the right person. You won’t get much out of it, when people have an “online playstyle” where they just mash buttons until it works. But if both of you play an “offline playstyle” you can learn matchups, you can try some setups, learn conditioning, and get rid of your bad habits. Of course, you can’t react or learn how to ledgetrap for example, but you can still get something out of it.

Let’s talk about your sponsor. Due to COVID some teams stopped operating. How was it for you? Did anything change since COVID started?
No, nothing changed. Smuff is always here for me, giving advice, checking on me whether I’m in a good spot mentally and supporting me. My contract didn’t change either.

That’s nice to hear. Now to our final topic. With the return of offline events in the foreseeable future, where do you see yourself? There was no PR in 2020 but how about next one?
I was surprised we didn’t get a PR in 2020, because we had around 6 months of competition. Before the second quarantine in October, I had some really good results, so I’m confident to make it on the PR, but I’m not sure which place. I don’t really play versus the Swiss German players, so it’s difficult for me to judge how much they’ve practiced. But looking at the results of the Numerik Games tournament, I think the Romandie has gotten a lot stronger. Looking at myself, I could see myself in the Top5 to Top10 range. Rohan_doge (@rohan_doge) is also pretty insane, I could see him as Top5, maybe 4 in Switzerland.

You’ve already mentioned rohan_doge, can you give me 2 more players, excluding yourself, we should be looking out for when offline events return?
Mmh… probably C/B/F (@CBF_ssb) if he took the game a bit more seriously. I think he has a lot of potential. My second mention would go to PATOO (@PATOO_SSB) one of the young players from Geneva. I think his biggest weakness is his mental game, but if he overcomes that he can become really good, potentially Top10 in Switzerland.

Do you have any hot takes or some banter regarding the Swiss Smash Community?
Not really. I think the Swiss Community is playing well, but not well enough. I generally feel like a lot of players are a bit too complacent when it comes to getting better at the game. It doesn’t happen on its own, you need to practice and put in the hours to get results. In my opinion the Swiss players are not “tryharding” enough. It’s hard for me to describe, but there is a way the game is meant to be played, and I don’t see that too much in Switzerland. But the potential is there! If we tried a little harder, I could see the five best players of Switzerland making the Top50 of Europe.
Ah wait, something came to my mind! I hate rohan_doge! (laughs)


If you want to see more of Neo, you can follow him on Twitter or try catching his stream on Twitch where he’s streaming regularly in the evening (in French).
He’s also participating in Benooou’s “Swiss Series – Couch Edition” where he will be playing against DeepFreeze in the near future (give @BenooouSSB a follow to keep up to date with the schedule). The entire series will be streamed live on Twitch, starting on May 28 with rohan_doge vs. SickBoy.