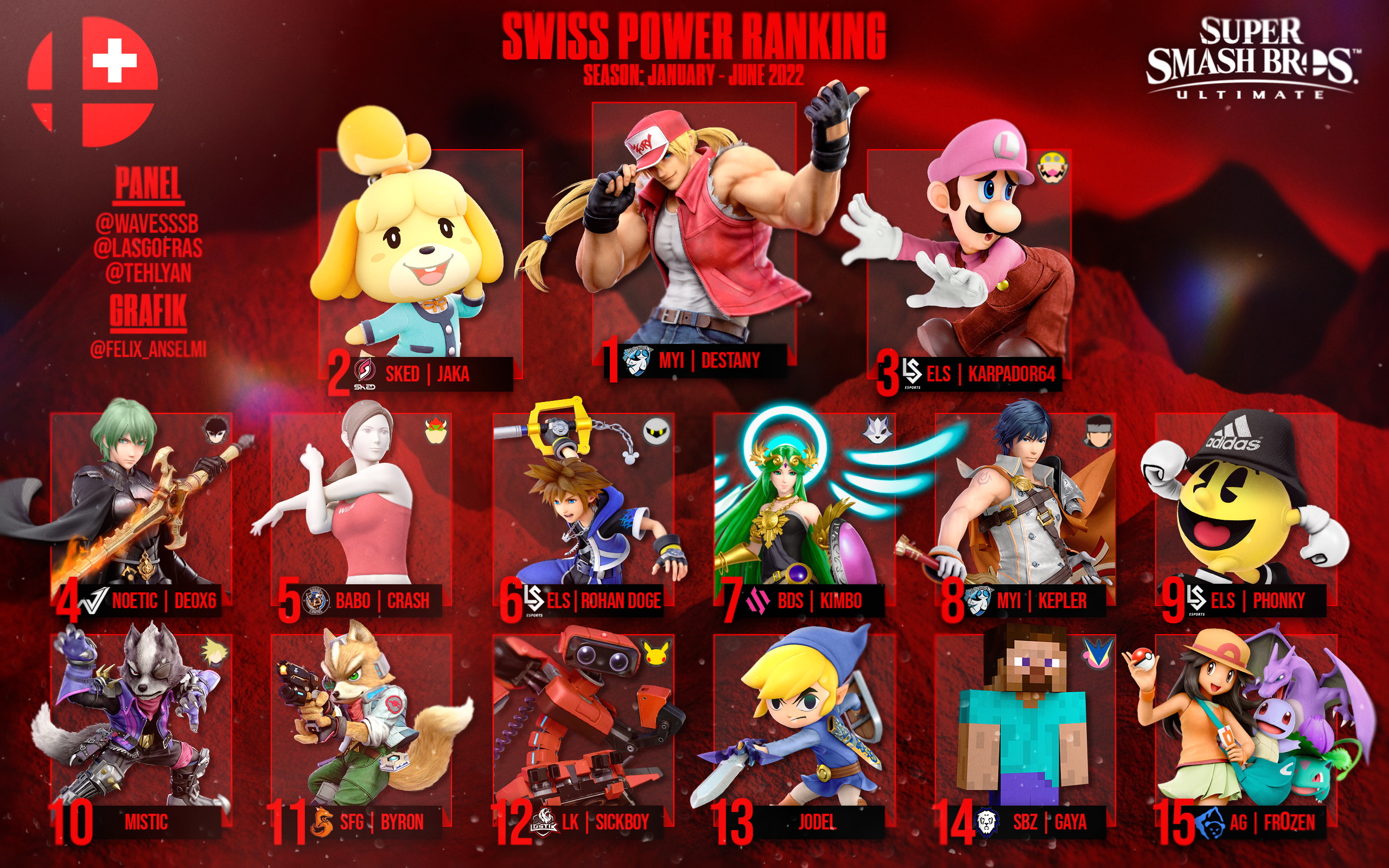 This post is about the Top10 of the January – June 2022 Swiss Power Ranking, if you are interested in the players ranking from 11 to 15 check out this article.

Using his own words, mistic just played a little less bad than previously and made it onto the PR. In other words, he was able to take sets off of 5 of the 7 other Top10 players he faced in bracket, which is a clear indicator for his potential as a player. St.Gallen seems to be where he is the most comfortable as he was able to finish 4th both at Saint Smash #8 and #9, winning a combined 5 sets against other Top10 players. Even more impressive is his second tournament run considering he lost his first round in pools and made a losers run all the way to 4th place. There are still some matchups in which he seems a bit uncomfortable in, but with a good mindset and some confidence in his characters mistic could potentially even win a tournament soon.

Phonky getting his favorite number 9 on the PR is maybe exactly the power-up he needs for the coming season. The newly signed Pacman player for Lausanne Esports took a bit of a break during the first half of 2022 and only attended a few tournaments. While he placed respectably well, like his 5th place at Exodus 3, he was unable to clutch out some wins against the best in Switzerland, unlike in 2021, but on the other hand was also considerably more consistent. If he can keep this newly found consistency and add some Top10 wins to his name, then it can only go up from here on.

mYinsanity’s Kepler experimented with maining Chrom in the first half of 2022 and found success doing so. After a bit of a rough start into the season he was able to consistently place well, but also struggled against a few players or characters in particular. Most notably he was able to finish with a 4th place at Orcus Smash 7 and a 7th place at Exodus 3, as well as winning Super Smash Qwertz #10. Kepler has announced that he might go back to maining Snake for the second half of 2022 and so we have to wait and see where that will take him.

The season started great for BDS Kimbo with two tournament wins at Super Smash Qwertz #8 and Noetic x Frismash 2/12. He managed to continuously perform well throughout most of the season and even his worst results are still noteworthy. School was once again keeping him busy and he is still struggling a bit with his in-game mentality, according to himself. Being disappointed in himself somewhat quickly only shows how ambitious the young Palutena main is but is also something he needs to learn to deal with during bracket. Facing Kimbo at 100% strength is going to be a daunting task for even the best in Switzerland in the future.

2022 showed that Lausanne Esports’s rohan doge has fully adapted to his new main Sora, while keeping his Metaknight ready for his good matchups. His many tournaments and regular attendance at weeklies let him polish his characters and secure himself some tournament wins, namely Super Smash Qwertz #9 and the E-Caribana Open Tournament. Additional great performances include a 2nd place at Super Tournoi and a 5th place at Exodus 3. His next task will be to grab some more Top10 wins and find a consistent strategy against his most frequent local rivals Deox6 and Kimbo.

Family business is keeping Crash busy and limited the tournaments he attended in the first half of 2022. Nevertheless, he was still able to perform quite well overall, only losing to mistic once, the only loss against a player ranked below him. Finishing 3rd at Saint Smash #8 and 9th at the E-Caribana Qualifier are the kind of results that can generally be expected of Babos Gaming’s player. Low attendance is a slippery slope and Crash has managed to keep his performances up in Switzerland, but as his competition becomes stronger here, he better be prepared for what is to come in the second half of 2022.

Regular attendance is not something Noetic’s Deox6 is known for and similar to last year he only competed in a handful of tournaments throughout the season. But irregular attendance does not mean that he lost any of his dominance as he once again won both the ABFT Monthly #1 and Noetic x Frismash 1/12. His worst performance was a 13th place at the E-Caribana Qualifier, where he lost to Sickboy and foreign invader Otakuni. All we can hope for is for Deox6 to finally attend more tournaments, particularly in the Swiss-German part, because if his 100% winrate over the Top10 in Switzerland (albeit a small sample size) and his performance at the E-Caribana Invitational are any indicator for his potential, then he could certainly be competing for the title of the best player in Switzerland.

After a year of ups and downs, Lausanne Esports’s pink Luigi managed to stabilize and got consistent and amazing results in the first half of 2022. Most notably he finished 4th at Exodus 3, 3rd at Orcus Smash #7, and 2nd at Saint Smash #9, beating Jaka. This last result is especially noteworthy because, while Karpador64 was able to win most sets against players ranked below him, he struggled against Destany and Jaka, who typically occupied the first two places at tournaments. But there are still improvements to be made, as there was a total of 7 different players, who managed to take a set off of him, more than most other players in this area. Mentality is something he wants to work on in this regard and so we are going to see how that will work out for him in the second half of the year.

The beacon of Swiss prowess at international tournaments is shining a little less bright in 2022 when compared to the previous year. While still able to win a few tournaments, like Super Tournoi, Jaka was only able to do so in the absence of Destany. He was still able to outperform the rest of Switzerland overall and finish 2nd at most events but also had to concede some sets against other Top10 players and some foreign invaders. It is important to keep in mind that he is still the uncontested #2 as of now and he is certainly not willing to give up any more ranks in the second half of the year. Quite the contrary, with his new sponsor Sked comes a breath of fresh air for the solo Isabelle main, one that might turn the tides against his biggest rival Destany. Even if some recent tournaments did not count towards the PR, he has started winning some sets again…

The king has retaken his throne. “Jaka supremacy” has been broken and in what a dominating fashion. Destany is holding a 11:0 set record against Jaka in the first half of 2022. Of the 8 tournaments mYinsanity’s player entered he won 7, only getting 2nd place to Lancelot at Exodus 3. Throughout the season he has lost a single set to Karpador64, his only loss against a Swiss player. On top of that he managed to defeat a plethora of foreign invaders at the E-Caribana Qualifier and the Invitational tournament. Deeds speak louder than words, and therefore, there is little more to be said except ”long live the king”.

The 2022 January - June PR follows the same criteria as previous rankings.
Fortunately, no tournaments had to be cut due to bad infrastructure or bad seeding. The E-Caribana Invitational towards the end of the season was only counted towards head-to-head record related statistics. The following remaining tournaments were counted towards the PR: 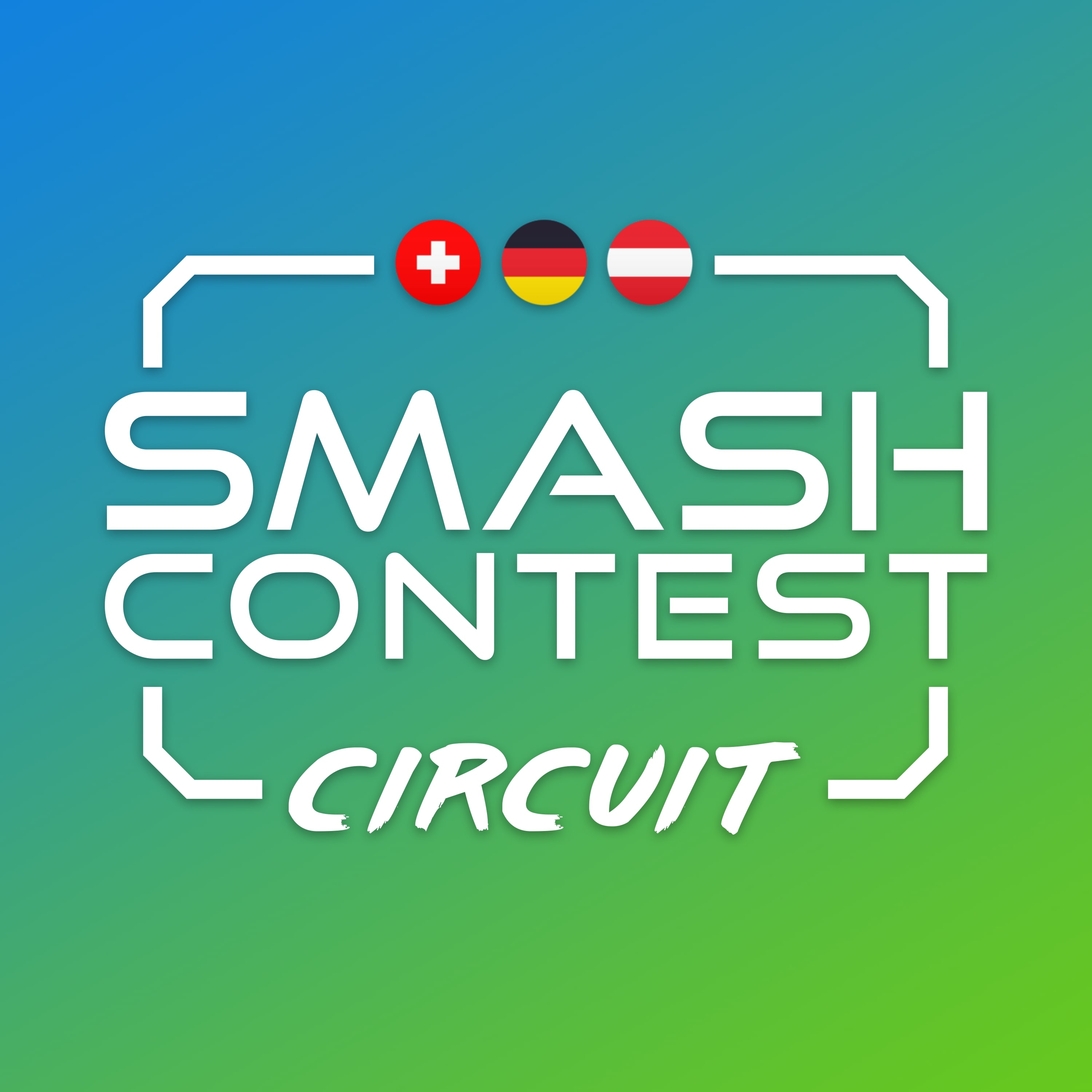